Adding security forces in Baghdad may mean safer streets, but it also highlights a problem for the Bush Administration: Iraq is not safe. And an increasing number of Americans want U.S. troops out, for good.

INSKEEP: When you look at the situation that the administration is faced with, what are their options?

KOPPEL: Well, their options are to make a bad situation look as good as they possibly can. And I don't think that the fundamental strategy has changed. One hears talk of a new White House strategy. If there is one, I'm frank to admit, I don't know what it is, and I'm not quite sure what, at this late date, they could create, that would be a new strategy. I think they're pretty committed to the old one, which is not allowing Iraq to deteriorate into chaos and anarchy.

INSKEEP: Although there are some limitations here as well, aren't there, in terms of the politics of the United States?

KOPPEL: I'm not sure that there really are. I mean, my sense, Steve, is that if, a couple of years from now, we were to find ourselves with a Democrat president, that he or she would be pretty much bound by the same strategic interests in the Persian Gulf that now bind the Republican president.

We need the oil. Iraq has, as its neighbor, a country that is essentially unfriendly to us, Iran. The government in Saudi Arabia is weak, and the oil that comes out of the Persian Gulf is absolutely critical to the national interests, not only of the United States, but to our European allies and to Japan. Add to that the fact that you have a civil war in Nigeria and that Hugo Chavez in Venezuela is making nasty noises, and you have a situation in which we simply cannot afford to let the Persian Gulf explode into chaos.

INSKEEP: Are you saying, that in reality, this is about oil?

KOPPEL: Of course. It's always been about oil. I mean, look, you can go back to 1953, when Mossadiq, who was the elected prime minister of Iran, was overthrown with the help of U.S. and British intelligence, because he was threatening to nationalize the oil industry in Iran - and what has followed, through both Republican and Democratic administrations, since then - and you see it is one of very few areas, the Persian Gulf, is one of the very few areas where there has been absolutely bipartisan foreign policy agreement. We cannot afford to lose the oil that comes out of that region of the world.

INSKEEP: How have past White Houses dealt with this situation, where there's a crises and you have a president who is very unpopular, well south of 50 percent?

KOPPEL: You deal with it by trying to make things look as good as you possibly can. And when a little but of good news happens - when a major terrorist leader is killed, as was the case a few days ago - you make the most of it. The president's trip to Iraq is obviously intended to convey a sense of momentum. And that's what you do. Things are happening. It's moving in the direction that we've always wanted things to move.

Maybe they are, but it'll take more than a presidential visit to Iraq to make those things happen.

INSKEEP: Does the president's popularity matter?

KOPPEL: It matters to him. It matters to the Republican Party. But I would be astonished if George Bush would do anything but stay the course. And that really means leaving tens of thousands of U.S. troops in Iraq, certainly through the end of his administration.

And I would be astonished if the next president, Republican or Democrat, is able to reduce the number much below 50,000 for years to come.

INSKEEP: People have tried to draw comparisons to Lyndon Johnson, in Vietnam. Do you think there's a historical parallel to the situation that this president is in?

KOPPEL: There may be, from a political point of view, although I think it's still too early to say. From a strategic point of view, I don't think there is a parallel. I never believed that the United States had a genuine strategic interest in being in Indochina. Perhaps we shouldn't have gone into Iraq in the first place, I mean the motives that were cited clearly have, for the most part, have turned out to be untrue, inaccurate, or misplaced.

INSKEEP: You're saying the U.S. could withdraw from Vietnam and not be harmed that much. In this case, it's different.

KOPPEL: If we were to leave now, we have stirred up such a hornet's nest over there in Iraq, that to leave now, before it's all calmed down - even that is an assumption that we can't necessarily make, I don't know whether we will be able to calm it down - but I think we have both a strategic and a moral obligation to try. 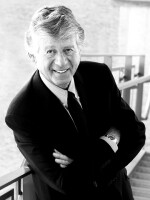 Ted Koppel
Respected broadcast journalist Ted Koppel is a commentator who provides analysis and perspective on the topics and events that shape our world. His news experience and interests are wide-ranging, spanning topics from national security, values, privacy, health and the media to Iran, Iraq and the Mideast.
See stories by Ted Koppel
Learn All About WKMS Vehicle Donation!
Looking for Something to Do?
Search Local Events