In west Tennessee, a group of Black farmers take on Tyson Foods

Brenda Scott’s father came to west Tennessee as a sharecropper. By 1971 — as a result of hard work and government loans — he had 129 acres of his own, some of which his descendants occupy today.

His adult children and grandchildren belong to an enclave of Black farming families that have lived in Henderson County’s Cedar Grove community for generations. Some continue to raise hogs, cattle and crops. Others, like Scott, left for college and jobs, only to return to raise their kids.

Scott, along with many Cedar Grove families, have now become part of a novel legal challenge to a federal government farm loan program they say has allowed industrial poultry operations to proliferate at a cost to the long established community.

I really want to stress the fact that this was a predominantly Black community growing up; it’s legacy land we want our kids to grow up on and enjoy the freedoms and experiences we had growing up. . . My fear now is that there’s no regulations for these chicken operators.

Chicken farms have rapidly expanded across rural west Tennessee in recent years in order to supply product to Tyson Foods, the world’s largest poultry producer. The Fortune 500 company’s footprint has been rapidly expanding in the state.

Last year, Tyson opened a $425 million meat processing plant in nearby Humboldt, Tenn., its third large-scale Tennessee plant. The operation was made possible, in part, by $20 million in taxpayer incentives from the administration of Gov. Bill Lee.

Tyson relies on contract growers located within about a 60 mile radius of their slaughtering plants. The contractors raise chicks supplied by Tyson in massive barns built according to Tyson specifications and bring them to Tyson’s Humboldt plant for slaughter in order to get paid.

Scott, who is 56, said her community shares the same concerns as family farmers in adjoining counties who in recent years have tried — and failed — to get local or state governments to more closely regulate industrial chicken farming operations.

The operations produce vast quantities of chicken manure that she fears will pollute the well water her family relies on for drinking, the streams and creeks they fish for catfish and the quality of life that beckoned her back home to raise her two sons.

“I really want to stress the fact that this was a predominantly Black community growing up; it’s legacy land we want our kids to grow up on and enjoy the freedoms and experiences we had growing up,” she said. “There’s nothing like country living.”

“My fear now is that there’s no regulations for these chicken operators. What’s going to happen to my grandchildren drinking our well water? What about the air quality? I have asthma. So do members of my family. And nobody is telling us anything.”

A new lawsuit brought by the Southern Environmental Law Center, representing Scott and neighbors who banded together to form “Concerned Citizens of West Tennessee,” is now challenging the federal government’s role in providing tens of millions of dollars in taxpayer-backed loans to Tyson contract growers.

The litigation claims the United States Department of Agriculture, through the Farm Service Agency, is illegally subsidizing industrial chicken operations through a federal lending program intended to provide “family farms” with startup and operational capital.

“The federal loan guarantees are illegal because the lending program is reserved for helping ‘family farms.’ Because Tyson controls virtually all aspects of the industrial chicken growing operations, those facilities are not ‘family farms’ under applicable lending rules.”

The lawsuit also accuses the Farm Service Agency of failing to follow its own rules in conducting thorough environmental impact studies of farm operations seeking the loans — or in keeping local communities informed.

Instead, the federal agency only conducts perfunctory environmental reviews, before issuing “rubber stamped approval,” according to the suit.

The lawsuit names a pair of affiliated operations across the street from one another in the Cedar Grove community that are owned by two limited liability companies — Trang Nguyen, LLC and Nguyen LLC. Each LLC is owned by one individual.

Each operation has 8 chicken barns, massive single-story structures the length of a football field that hold 624,000 Tyson chickens at any given time.

The barns, along with an open-air chicken waste dumping area, lie adjacent to a subdivision of more than a dozen homes and are located within 3 miles of the Cedar Grove community’s four Black churches, Scott said. On the far side of the barns, a Mennonite farming community has lived for decades.

Scott is a longtime member of Bible Hill Baptist Church. Her husband pastors two of the other churches: Mount Pleasant Methodist and Seats Chapel Holiness Church.

“We see them every Sunday,” Scott said. “I can see them on my way to church.”

The USDA did not respond to a request for comment, and contact information for Trang Nguyen LLC and Nguyen LLC’s could not be immediately found.

Poultry farmers that contract with Tyson buy land and build barns in communities surrounding the company’s processing plants to serve as sole company suppliers. Many of the farmers have little or no prior farming background. A growing number of Vietnamese-American families have moved to Tennessee from elsewhere in the nation to start their own Tyson-contracted chicken-growing operations.

In 2017 — the same year Tyson announced its plans to open its Humboldt facility — Tennessee lawmakers rolled back a requirement for poultry growers to obtain water quality permits from the Tennessee Department of Environment and Conservation.

According to the lawsuit, Trang Nguyen, LLC bought 152 acres in Henderson County and Nguyen, LLC bought 128 acres; then the two farmers collectively secured federal loan guarantees of approximately $3.5 million to purchase, construct and operate the facilities.

The federal loan assistance can take the form of direct loans of up to $600,000 from the Farm Service Agency or up to $2,037,000 through a commercial lender with FSA loan guarantees. The loans are confined to farmers and their family members

The rules guide agency officials to define a “family farm” as one that is “recognized in the community as a farm,” and that has “day-to-day management operational decisions should be made by members of the family farm”

Tyson financed a large portion of the cost of the building the Nguyens’ facilities, contributing more than $960,000 in construction funding, the lawsuit said.

“The Nguyen’s will not be poultry ‘farmers,’” the lawsuit alleged. “They will be poultry caretakers who own neither chicken nor feed. They will be much like indentured servants, strapped with tremendous debt and laboring within an industrial meat complex in which they are required to follow Tyson’s rules, lest they suffer extreme financial consequences.”

The lawsuit notes that other government loan programs have determined that poultry contractors do not qualify for loans because of their integration into corporate operations.

Our legislature has passed laws that make it impossible for neighbors suffering or losing their home values to go to court. The courthouse doors to these individuals are closed.

Tyson “exercise(s) such comprehensive control over poultry growers that those growers do not qualify for small business loans,” the lawsuit said, noting that the Small Business Association refuses to consider the poultry growers as “small businesses” for the purpose of loans because of their control by corporate poultry corporations.

The federal loans and loan guarantees must also include an environmental assessment of the planned farm operations to “determine whether a proposed action would significantly affect the environment.” and to “involve the public in the environmental review process as early as possible.”

The federal challenge follows years of failed efforts by family farmers in other rural west Tennessee communities to challenge poultry growing operations. Those efforts have largely been stymied by state deregulation.

In 2017 — the same year Tyson announced its plans to open its Humboldt facility — Tennessee lawmakers rolled back a requirement for poultry growers to obtain water quality permits from the Tennessee Department of Environment and Conservation.

And, noted George Nolan, an attorney with the environmental law firm, residents have little recourse to take legal action against the massive chicken operations because Tennessee is a Right to Farm state, a reference to a 1982 law enacted to protect farmers from nuisance lawsuits by city or suburban dwellers who moved to rural communities, then protested about the noise, odor and pesticides from farms next door.

“It’s a very problematic situation,” he said. “Our legislature has passed laws that make it impossible for neighbors suffering or losing their home values to go to court. The courthouse doors to these individuals are closed.”

James Lavel, a retired Navy commander in Henderson County, who has advocated for greater poultry operation regulation, said last week he has been frustrated by local and state elected leaders actions, and inactions, in the movement of large scale animal operations to the area, where the dangers of air and water pollution, and the overwhelming smell generated by chicken feces, have disrupted quality of life.

“I’ve gotten a hodgepodge of excuses from them,” Lavel said. “And then the FSA comes in here and uses our taxpayer money for this. If you just keep putting the people at risk you’re trying to feed, what’s the point? We need regulations. They exist to protect the people.”

Scott said the willingness of the federal government to provide Tyson contractors with federally subsidized loans and loan guarantees carry a particular sting for her, a second generation African-American farmer.

In 2018, Scott applied for the same loan program to grow watermelons on the tract she inherited from her dad, who passed away in 2003.

She was denied, she said, because she lacked “managerial experience.” 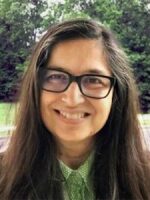 Anita Wadhwani, Tennessee Lookout
Anita Wadhwani is a senior reporter for the Tennessee Lookout. The Tennessee AP Broadcasters and Media (TAPME) named her Journalist of the Year in 2019 as well as giving her the Malcolm Law Award for Investigative Journalism. Wadhwani is formerly an investigative reporter with The Tennessean who focused on the impact of public policies on the people and places across Tennessee. She is a graduate of Columbia University in New York and the University of California at Berkeley School of Journalism. Wadhwani lives in Nashville with her partner and two children.
See stories by Anita Wadhwani, Tennessee Lookout
Learn All About WKMS Vehicle Donation!
Looking for Something to Do?
Search Local Events
Related Content