12 pm
Women of the Civil War
Karen Abbott talks about her book Liar, Temptress, Soldier, Spy, about four courageous women of the Civil War who made history. Then we talk with Lois Leveen about her novel, The Secrets of Mary Bowser, about an African American ex-slave who was a Union spy right inside the Confederate White House.

Friday, March 11th
—
11 am
Femme Fridays: Who We Are
Asia Burnett hosts "Who We Are," part two of the Femme Fridays series. This episode features musicians around the world and from right here in our western Kentucky backyard. "Who We Are" also celebrates working women and offers perspectives on the female experience within our own communities, including themes like work.

12 pm
What's the Word? Medieval Women
Have you ever thought about what your life would have been like if you had been a woman in the Middle Ages? Typically, we think of the Middle Ages as a time that offered women very few options, but you might be surprised by some of the accomplishments of medieval women. We talk about one of Chaucer's most famous and feisty characters in The Canterbury Tales, the wife of Bath, religious lifestyles of medieval women with works by the 12th century German nun Hildegard von Bingen, and about women healers in medieval Spain.

Friday, March 18th
—
11 am
Femme Fridays: Decades
Dixie Lynn hosts "Decades," the third part of the Femme Fridays series. Lynn will travel through time and revisit influential female artists from the 60s, 70s, 80s, and 90s. This episode will also include a historical perspective on womanhood over the years.

12 pm
Hearing Voices - Her Stories
The Kitchen Sisters go to Tupperware parties. A supermarket checker checks out her life in ZBS's radio soap "Saratoga Springs." Jenifir returns "Home From Africa" with all 13 Symptoms of Chronic Peace Corps Withdrawal. Host Dmae Roberts has a collage of and about "Sisters." In a new syntax of whispers and words, Susan Stone tells the story of "Ruby" and her husbands. And Sonia Sanchez, Tracie Morris, Jill Battson, and Meryn Cadell perform short poems. Music from Tara Key's Ear & Echo.

Wednesday, March 23rd
11 am
Photograph 51
While names such as Watson and Crick are now synonymous with the discovery of DNA, Rosalind Franklin remained a marginalized and misunderstood figure...until recently. In Photograph 51, playwright Anna Ziegler and star Miriam Margolyes bring Franklin to life in a story of brilliance, discovery, and the perils of unchecked ambition. The broadcast includes interviews with Franklin biographer Brenda Maddox and Cal Tech biologist Dr. Pamela Bjorkman.

Friday, March 25th
—
11 am
Femme Fridays: All About Love
Jenni Todd hosts the final installment of Femme Fridays. "All About Love" explores all facets of love in womanhood: romantic, platonic, and self. Featured music includes midcentury classics and contemporary hits. This episode will also feature perspectives of women in the community about love.

12 pm
Witness: Women's History Month
Remarkable stories of women's history, told by the women who were there. Selected from the BBC's Witness History program, we hear moving, inspiring, and even outrageous stories about a few of the most important women in living memory. How women in the North of England took to the streets in the late 1970s to protest against a serial killer; Sandra Day O'Connor: America's first female Supreme Court justice; China's 'Kingdom of Women;' 'Jane,' the underground abortion network; American writer Ursula Le Guin, and Dr. Ruth Westheimer: the woman who got America talking about sex.

Melanie Davis-McAfee
Melanie Davis-McAfee graduated from Murray State University in 2018 with a BA in Music Business. She has been working for WKMS as a Music and Operations Assistant since 2017. Melanie hosts the late-night alternative show Alien Lanes, Fridays at 11 pm with co-host Tim Peyton. She also produces Rick Nance's Kitchen Sink and Datebook and writes Sounds Good stories for the web.
See stories by Melanie Davis-McAfee 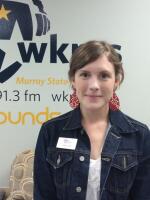 Dixie Lynn
Starting at WKMS in 2014, Dixie is the station's Corporate Support Manager, working with local businesses and community organizations. She's been an avid supporter of public radio since her teenage years. Other than public radio, her passions include live music, natural health and nutrition, hiking, traveling, and animals. She serves on the Paducah Main Street Board and is a member of the Paducah-McCracken County NAACP and the Heath Family Resource & Youth Services Center Advisory Council. Dixie and her husband, local musician and historian Nathan Lynn, reside in Paducah with their two kids.
See stories by Dixie Lynn
Learn All About WKMS Vehicle Donation!
Looking for Something to Do?
Search Local Events
Related Content