A Murray State University assistant professor was appointed this month to Kentucky’s Native American Heritage Commission. The commission aims to bring awareness and provide an in depth understanding of Native American traditions, culture and contributions made by Native Americans to the state.

Professor Marcie Venter believes higher learning institutes are one of the primary means of educating Kentuckians about the indeginious roots of the state. Venter said in Kentucky, there’s been a long tradition of denying Native presence.

“It goes back to this whole myth of the dark and bloody ground where Native Americans weren’t really living here and didn’t really have any permanent settlements here,” Venter said.

She said archived Native tradition and archeological evidence has shown that indigenious people living in Kentucky for centuries. She also said many Native Americans were forcibly removed from the state in the past, but there’s still an indigenious presence. She explained the three prominently active tribes in Kentucky are the Eastern Shawnee, Chickasaw and Cherokee.  Outside tribes are also making a presence in Kentucky through the gaming industry with casinos and racetracks. Venter said she wants to use her appointment to the commission to highlight that indigenious presence.

“I think a lot of them are not known, not paid attention to in large part because of the removal process in the nineteenth century, removing some of the nations,” Venter said. “I think recognizing the traditions that Native Americans had and continue to have in Kentucky is one of the benefits of the commission.”

Venter has already attended one commission meeting, where they discussed the needs and concerns of the Native American communities in the state, as well as some developing education plans and some possible art exhibits in the future. The commission’s meetings are open to the public.

Many art exhibits are in the works from the Native American Heritage Commission and will be based in Frankfort. Venter was sought for the appointment to increase the commission’s presence in western Kentucky. The majority of the commission is from the Bluegrass region. When asked about what the public could do to bring more awareness to the Native communities, Venter pointed to educational initiatives.

“Education is a big part of that and education can come in a number of forms. It can happen in the public school system. Very few classes exist that really talk about Kentucky history and Native aspects of Kentucky history. A couple of school systems may briefly mention some aspects of Kentucky archaeology and Native history… educating the youth is a big part of it.”

Venter will serve her term on the commission until September 1, 2023. 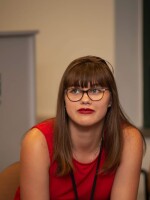