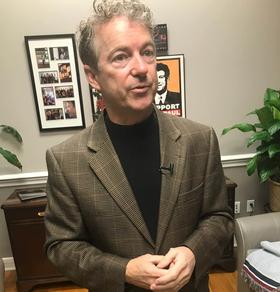 U.S. Senator Rand Paul of Kentucky is hopeful that debate over border security will not lead to a partial government shutdown later this week.

President Trump said last week he would be "proud to shut down the government" if Congress doesn’t approve the $5 billion in funding that he wants to build a wall on the border with Mexico.

In a wide-ranging interview at his field office in Bowling green on Friday, Senator Paul said while he’s in favor of enhanced border security, he’s not in favor of giving the president a blank check.

"I've been afraid that some of the requests for wall funding are excessive, like $25 million a mile. I think it can be a combination of both advanced technology to detect movement across the border and some walls in some urban areas," Paul stated. "They'll be some jockeying back and forth and some sort of compromise will have to happen on how much wall funding gets in there."

If Congress and the president fail to reach a compromise by December 21, the nation would see government operation operations cease, although on a limited scale.  Some appropriation bills, including national defense, have already been passed.

Whatever amount of funding that Congress considers for border security, Senator Paul says decisions should be made in the context that the nation will spend a trillion dollars more than what comes in as revenue this year.  With his own party in control of the federal government, Paul says Republicans haven’t been much better than Democrats at controlling spending.

Meanwhile, the Bowling Green Republican has voted in support of a resolution ending American support for Saudi Arabia’s war in Yemen.  The vote to withdraw U.S. military assistance is a rebuke to President Trump who has defended Saudi Arabia over the country’s role in the murder of Washington Post journalist Jamal Kashoggi.

The U.S. House doesn’t plan to take up the resolution before the end of the year, meaning the measure is largely symbolic.  However, Senator Paul says his chamber’s vote sends a broader message about who has the authority to declare war.

"This is the first time since Vietnam that a body of Congress, the Senate, said it is our prerogative," Paul told WKU Public Radio. "The constitution gave the prerogative to whether or not we initiate or declare war to the Congress. Our founding fathers were unanimous. It was supposed to be Congress that declares war, not the president."

Senator Paul says he doesn’t think the U.S. has a national interest in Yemen and fears the war could make the Middle East worse with 15 million people on the brink of starvation and a deadly Cholera outbreak.  If the Saudis keep bombing civilian centers and preventing food from coming into Yemen, Paul thinks the U.S. resolution will be voted on in the House as early as January.

Senator Paul downplayed potential campaign finance violations by President Trump and the potential jail time he faces.  Trump's former lawyer Michael Cohen has said the president directed him to pay off two women, with whom he had extra-marital affairs, in order to secure their silence just weeks before the 2016 election.

Kentucky's junior U.S. senator doesn't think campaign finance violations should be criminal and said, if anything, the president should pay a fine to the Federal Election Commission.

"Candidates, all the time, end up having to pay fines, so I think that's what it ought to be and we ought to just see it as that," remarked Paul. "I think we'll become like these banana republics where every time someone gets voted out of office, they go to jail. Who's going to want to participate in government if we're going to criminalize everything about campaign finance? Hopefully, saner minds will prevail as we look at this over time."