This story is part of a WKMS News series highlighting organizations and groups helping others amid the pandemic.

Children experience many things that keep them awake at night; be it struggles in a friendship, nightmares, or a little too much caffeine before “lights out.” Yet for some Marshall County youth, it was as simple as not having a bed.

Family Resource and Youth Services Centers (FRYSC) of Kentucky, specifically Roots to Wings YSC of Marshall County Schools, have worked to ensure that Kentucky’s elementary and highschool students receive care and are able to thrive scholastically regardless of the situations existing prior to or as a result of the ongoing health pandemic.

FRYSC coordinator of Roots to Wings, Glenda Byers, said soon before the pandemic they administered the required biennial survey which determines program offerings in the future. Findings included the concern of 75% of school faculty and staff which expressed inadequate sleep as a top student health concern. In response to the survey findings, the FRYSC facilitated a program called ‘Bed Blitz’ in partnership with local churches, volunteers, fellow students, the local extension club and the Homemaker’s club.

Roots to Wings screened students, and 25 of them reported they did not have a bed of their own. Of these students, 21 granted consent to participate in the Bed Blitz program and receive a bed.

The twin sized beds, constructed from 1x lumber and plywood material, were built in partnership with churches and a local bed ministry in Marshall County during a community service event. Other partners included the homemaker’s club, which crafted pillow cases for the beds, and a local business which donated a new mattress for each student’s bed.

Zoey (17), a student in Marshall County, and her six siblings each received a bed through the Bed Blitz program. Previously, the four boys and three girls shared beds on their respective sides of the rooms.

Zoey said before receiving beds, she and her siblings' sleeping arrangements were so crowded they couldn’t extend their legs and be comfortable.

“They always tell me that they are grateful to have the beds because now they have their own space,” she said, “Sometimes when we slept together in the same bed, we would wake each other up.”

Mary, Zoey's mother, said since recieving the beds her children are getting along better both at school and in the home. She said she’s no longer playing  peacemaker while the kids argue over who gets which blanket, pillow, or side of the bed. She said she can also sleep better at night knowing her children are peacefully settled.

Byers reported that during this program, the FRYSC strove to build beds for kids and build relationships with those students to give them something that was really their own.  Zoey said she felt the gesture.

“I like the part where they added things like what we would probably like. Like the color of the things that they chose. For mine, I got a bedding that had flowers on it, which is specifically what I really like. I just had to tell them what I really wanted and they chose the correct beddings and comfortable pillows...and comfortable, soft cozy, blankets that would help us be comfortable at night.”

Byers said the relationship she forms with families through programs and home visits is a great way to put a face to her name, and the FRYSC.

“Whenever we help a family with a bed, I always go out to the home, and it's just a great way to build that relationship...And I have noticed that the families that we helped with beds, they are more likely to contact me when other things come up, because I think they feel a little bit more comfortable,” she said.

Zoey and Mary also expressed gratitude to the church members who delivered the beds to their home.

“After we knew that they were from church, we were really happy because then we know specifically what church it came from and how happy we are to have churches in here that help us like this,” Zoey said, “Our favorite part of this was when they came in and prayed for us. That was incredible and I was so happy.”

Zoey said having her own bed has also positively impacted her scholastic performance.

The highlight included a conclusion of the Bed Blitz program results and report that for students who received a bed, “attendance rates rose by an average of 15% and GPAs increased by an average of 20% by the end of the spring semester.” Following its success, Bed Blitz still continues to provide beds to students or families who report a need.

In reference to the pandemic, Owen said, “FRYSC was made for this. This was a situation that coordinators have been prepared for, were willing to adapt for, and this was an opportunity for them to shine and show the benefits of having a center in a community or the benefits of connection and relationships and just what it does when things actually take a turn for the worst.” 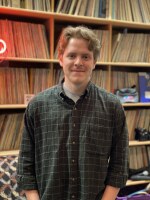 Duncan Sandlin
Duncan is a Nonprofit Leadership Major, minoring in Psychology at Murray State University. He has spent most of his memorable life working in the nonprofit sector and enjoys the work.
See stories by Duncan Sandlin
Learn All About WKMS Vehicle Donation!
Looking for Something to Do?
Search Local Events
Related Content