With the retirement of Kate Lochte at the end of this month, Murray State’s public radio station WKMS will have a new station manager for the first time since 1992.

Murray State President, Robert Davies said, “Kate has been a phenomenal leader for WKMS and an advocate for public radio in general. Kate has also been a tremendous and active member of the Murray State community. She has created a culture of excellence in radio programing and journalistic integrity. While we will miss her greatly, her legacy of high professional and ethical standards will guide the station for decades to come.”

Lochte came to Murray State with commercial television and radio experience when her husband, Bob Lochte, joined faculty in the Department of Journalism and Mass Communications in 1988. Joining WKMS staff in 1989 as secretary, Lochte served as operations assistant, assistant to the station manager and promotion/development director prior to becoming station manager in 1992.

During Lochte’s tenure as manager, the WKMS team has grown its reach and programming. A participant in 1995’s Corporation for Public Broadcasting (CPB) national leadership program “Next Generation,” she began relationships with grant, policy, and program makers that resulted in Murray State’s receiving external funding assistance for new translators, repeaters and equipment replacement and incentive funding for building out the station’s online presence and serving rural audiences.

The transmission system was Lochte’s primary focus for several years to deliver a better quality and more reliable signal. “Engineer Allen Fowler figured out how we needed low-power auxiliary systems, back-up service, and ground systems for reducing interruptions due to weather-related damages,” says Lochte, “and we addressed getting these in place in a deliberate way, then pursued widening the coverage area of the station.”

The WKMS “footprint” is now about 6700 square miles. “Enthusiastic WKMS listener contributions and underwriting investments made these improvements possible,” says Lochte, “along with the passionate work of talented Promotion/Development Directors including the late Frank Blodgett, Marian Mason, Ronda Gibson and Asia Burnett, who have progressively and successfully engaged more individual and business support.”

Along with the signal area expansion, Lochte has participated in the development of the Kentucky Public Radio Network, an effort that her predecessor, Janet Kenney, had encouraged. The Network recently completed a successful CPB planning project and is a participating station in two grant projects under consideration, which would further extend public radio’s service in the Commonwealth and beyond.

Since 2012 an interviewer for the WKMS program Sounds Good, Lochte’s other on-air work for WKMS included the half-hour community arts show, What’s Goin’ On, and an international music program variously titled Ports of Call and Country Music and holiday specials like A Kentucky Christmas. 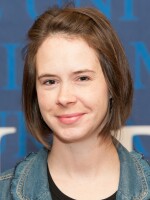 Jenni Todd
Jenni holds a degree in Music Education from Murray State University and a Masters degree in Arts Administration from Florida State University's College of Music. She's equipped with knowledge and enthusiasm for fundraising and the arts. She also serves as a Girl Scout Troop Leader and on the Murray Independent School District Foundation for Excellence Board of Directors.
See stories by Jenni Todd
Learn All About WKMS Vehicle Donation!
Looking for Something to Do?
Search Local Events
Related Content