Colin Moore here, filling in for Scott Ellison with the FLW Weekly Fishing Report. Scott is on the road, tending to a tournament in Maryland, but wanted me to say hi for him and wish everybody good fishing.

The lake is still about three feet low and unless we get quite a bit of rain in the next few weeks, it might not get much higher in the foreseeable future. So, the end result is that the lake has the blahs. The guys at the dam aren’t pulling a lot of water, and current both activates fish and whets their appetites. The result of low water and lack of current is that fishing is so-so for bass, pretty good but starting to drop off for bedding bluegills and shellcrackers, and fairly good for catfish and white bass.

A lot of us were surprised that it took less than a 20-pound average to win the three-day Everstart Bass Tournament out of moors resort last weekend. You figure with 150 of the best Kentucky Lake sticks fishing in early May, plenty of big stringers would be checked in. It didn’t happen. The heaviest bass of the event weighed just a tad over 4 pounds and, while there were a lot of 5-fish limits brought in, the average size was pretty puny.

Alabama rigs didn’t really play a big role either. The stringers that some of the alabama rig guys like Dan Morehead of Paducah brought in tell the story. Instead, strike king crankbaits fished around ledges, points and pockets were the most productive lures, along with jigs and the usual assortment of soft-plastics. That trend will continue until we have some sort of dramatic change in water conditions that schools up the bass.

As for the bluegills and shellcrackers, redworms and phyllis’s bluegill bugs are still the best bets. Fish them in 4 or 5 feet of water. A lot of fish are spawned out or got caught, so don’t expect easy fishing for a limit stringer. Still, there’s pretty decent fishing back in the big pockets and coves. As for catfish, bottom-fishing with prepared baits, cut shad or your favorite natural lure should produce. Catfish are prowling the flats between drop-offs and shorelines, and there are still a lot of them spawning too.

Though it’s a bit early, white bass are schooling and good catches are coming in on a variety of lures, including in-line spinners, white jigs, spoons and anything that’s cranked fairly fast and looks about the same size as a small shad or minnow. Watch for bunches of gulls and other birds diving toward the surface. Usually that’s a tipoff that bass have hemmed up minnows on the surface. Right now, it could be whites or blacks.

That’s it for now and until Scott comes back. Remember, if you’re running around on the lake this weekend, to be extra careful because the water is so low. Don’t cut any corners or run wide open across areas you’re not familiar with.

This is Colin Moore for FLW, hoping you get to enjoy the great outdoors we’re blessed with here in western Kentucky.

Tracy Ross
Tracy started working for WKMS in 1994 while attending Murray State University. After receiving his Bachelors and Masters degrees from MSU he was hired as Operations/Web/Sports Director in 2000. Tracy hosted All Things Considered from 2004-2012 and has served as host/producer of several music shows including Cafe Jazz, and Jazz Horizons. In 2001, Tracy revived Beyond The Edge, a legacy alternative music program that had been on hiatus for several years. Tracy was named Program Director in 2011 and created the midday music and conversation program Sounds Good in 2012 which he hosts Monday-Thursday. Tracy lives in Murray with his wife, son and daughter.
See stories by Tracy Ross 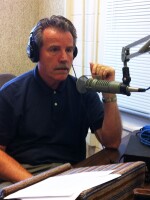 Colin Moore
Colin Moore is the Editor-in-Chief of FLW. He's had a lifelong passion for fishing and is the main writer of the weekly FLW fishing reports, filling in for Scott and Dave when they're on the road.
See stories by Colin Moore
Learn All About WKMS Vehicle Donation!
Looking for Something to Do?
Search Local Events
Related Content