This article was updated at 1:15 p.m. to include information issued by the Murray Police Department

A video posted to social media shows a man assaulting protesters with a chemical spray during an evening march on June 2 in Murray, in a second day of protests in the city related to the recent killings of unarmed black people across the country.

More than 50 protesters marched from a Confederate memorial featuring a statue of Confederate General Robert E. Lee aside the Calloway County courthouse, through the streets of Murray. Murray police cars escorted the protesters through the streets, with marchers disrupting traffic and holding signs with phrases including, “I can’t breathe,” and “Breonna Taylor,” the name of the black woman who was killed after Louisville police shot her in her apartment.

A press release issued by the Murray Police Department said the demonstration began with a gathering at approximately 5 p.m. on June 2 in the city's court square. In an effort to keep the protesters safe, department officials said, officers in patrol vehicles stayed in front of and behind the group as they walked several streets through the city including 12th and Main Streets.

At approximately 5:45 p.m., officers responded to a report of a man with a gun pointed at protesters. Officers located the vehicle and as a result of the investigation arrested 55-year-old John Dickerson of Paducah. He was charged with wanton endangerment 1st degree and lodged in the Calloway County Jail.

According to MPD, the protesters continued to walk and as they were passing a line of vehicles stopped in the southbound lane of 12th Street, 53-year-old David Frymire of Murray rolled down his window and sprayed pepper spray at multiple protesters and five MPD officers. Next, he reportedly attempted to drive into the crowd but was immediately stopped by police.

"The Constitution allows everyone the right to peacefully protest," the statement reads. "The Murray Police Department’s goal is to provide safety and protection to everyone."

Several of the protesters declined to be identified when asked for comment from WKMS News, but protesters did confirm the June 2 march was connected to an open letter published June 1 by Murray State University Assistant Football Coach Sherman Neal II.

Neal’s letter called for the removal of the Confederate memorial on the grounds of the Calloway County courthouse. In the letter, Neal said the “confederate memorial statue located on the courthouse square is an affront to all residents who support notions of equality and value the American justice system.”

Protesters at one point marched down 12th Street, when a man appeared to spray a brown-colored chemical at protesters. A woman protester said she, her girlfriend, and dog were directly hit by the spray. The woman declined to be named until she is able to seek legal advice. The woman said protesters left one lane of the street unoccupied to let traffic through. The protest was peaceful up until the point when the spraying happened.

“When we started coming up on his car, he had a gun pushed up against his chest,” the woman said. “We all went back and gathered around his car, and then he pulled out pepper spray.”

The woman said when the spray hit her around 6:30 p.m. that evening, it caused a burning sensation that lasted until early Wednesday morning.

“My eyes swelled shut. We couldn’t see to get out of the road,” she said. “It felt like our skin was on fire for hours.”

Milk and water were dumped on her, her girlfriend, and her dog. She also said her dog recovered from the spray after rolling on the ground and crying for hours. The video posted on social media also shows the man who sprayed protesters being handcuffed by Murray police officers.

Protesters ended their march back at the Confederate memorial next to the county courthouse, where speeches were given calling for the removal of the memorial. Murray police officers stood by the protesters, while supporters of the memorial also were present. Another social media video shows a black man who attended Sunday’s protest in Paducah, LaVar Holt, speaking to the protesters.

(Update: WKMS learned on June 3 that LaVar Holt's legal name was Richard Dillard. Dillard was arrested by the McCracken County Sheriff's Office for outstanding warrants on June 3. Dillard had told several media outlets, including WKMS, his name was LaVar Holt.)

The confederate display honors the approximately 800 Calloway County residents who joined the Confederate Army during the U.S. Civil War. The United Daughters of the Confederacy provided the funds for the monument. It was installed in 1917.

Sherman Neal II, in his open letter that sparked Tuesday’s protest, addressed Murray Mayor Bob Rogers, alongside other community leaders. However, Rogers said the city does not own the land on which the monument sits. He said this means the city has no jurisdiction to take any action concerning the statue.

“While we respect the opinions of all of our citizens, we are simply not in a position to legally pursue any efforts with regard to the Robert E. Lee Confederate Memorial,” Rogers said in a statement.

With the monument located on county property, the Calloway County Fiscal Court exercises control over any potential action to remove or alter the display. County Judge/Executive Kenny Imes expressed opposition to removing the statue at a candidate forum shortly before his 2018 election.

“The only time it would be removed is by a majority vote of the fiscal court, I would act under their direction, or in the case of federal marshals hauling me off to Paducah and putting me in federal prison. They could do what they want to after that,” Imes told community members at the forum.

Tuesday’s protest is the second day of protests in Murray related to recent killings of unarmed black people across the nation.

Kayla Crutcher, one of the vigil organizers, said the vigil served as a protest in bringing community members together while also sending a message to the Murray community.

“There needs to be conversations, and that’s what is happening, Crutcher said. “People need to have those conversations to educate themselves on what’s going on.”

This article was updated with a correction. WKMS previously reported Frymire was a resident of Paducah; the article now reflects he's a resident of Murray.

Liam Niemeyer
"Liam Niemeyer is a reporter for the Ohio Valley Resource covering agriculture and infrastructure in Ohio, Kentucky and West Virginia and also serves Assistant News Director at WKMS. He has reported for public radio stations across the country from Appalachia to Alaska, most recently as a reporter for WOUB Public Media in Athens, Ohio. He is a recent alumnus of Ohio University and enjoys playing tenor saxophone in various jazz groups."
See stories by Liam Niemeyer 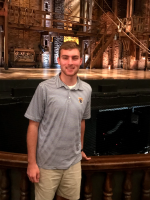 Dalton York
Dalton York is a student at Murray State University majoring in History with a minor in Nonprofit Leadership Studies. A native of Marshall County, he is a proud product of his tight-knit community.
See stories by Dalton York

Rachel Collins
Rachel’s interest in journalism began early in life, reading newspapers while sitting in the laps of her grandparents. Those interactions ignited a thirst for language and stories, and she recalls getting caught more than once as a young girl hiding under the bed covers with a flashlight and book because she just couldn’t stop reading.
See stories by Rachel Collins
Learn All About WKMS Vehicle Donation!
Looking for Something to Do?
Search Local Events
Related Content