UPDATE: The Symphony has postponed this concert out of concern for the health of their patrons and musicians. The performance will be rescheduled.

"The Pastoral Symphony is an amazing piece of music because...in [Beethoven's] nine symphonies (which was his lifetime), they read like an autobiography," Ponti explains. "He studied with [Joseph] Haydn and was a very, very good student. He learned all the rules from the 'father of the symphony,' Joseph Haydn. The first two symphonies that [Beethoven] wrote were a good student following all the rules of structure and harmony and development that Haydn taught him."

"The bad boy-Beethoven by Symphony No. 3 changed the rules and blew the structure out of the water," Ponti continues. "It was the largest symphony ever written in history, and he broke all the rules. He broke them all so well that he changed music forever. It opened the door for a lot of possibilities. By the time we got to No. 6, he used to take his morning walk when he used to write all his themes in his sketchbook."

The Pastoral Symphony was written down in Beethoven's sketchbook as "beautiful hand scribbling, almost illegible writing...the Pastoral is his morning visit one day," Ponti explains. The symphony paints a picture of the Viennese countryside with musical motifs and dramatic instrumentation in five movements.

"The first allegro ma non troppo is an 'awakening of cheerful feelings," Ponti says. "The andante is the scene by the brook. The allegro is the merry gathering of country folk. The allegro, which is actually the fourth movement, is this incredible thunderstorm. You can hear with the timpani and the striking of that drum...the brass, the severe chords...it sounds like thunder and lightning that he actually recreated for us."

"The allegretto, the final movement, is called Shepherd's Song," Ponti explains. "[It's the] happy and thankful feeling after the storm's here. You can hear the rumbling in the distance as the thunder and lightning are leaving us. The grass is glistening with dew. The birds are starting to come out and sing a little bit. This is not really about a forecast. This is about Beethoven's feelings when he experiences these locations and times of day and movements. It's a really incredible symphony."

In addition to the Pastoral Symphony, the PSO will also perform Elgar's Cello Concerto with guest cellist Julian Schwarz. "What a beautiful sound," Ponti says of Schwarz. "He's an organic, beautiful musician. The sound of his cello and his passion...it's like he's singing with a human voice. Absolutely gorgeous. He will uncover and share with us every nuance and every color that Elgar hid in his writing."

"You're going to love [Schwarz'] musicianship, and there's no better way to show it than the Elgar. The Elgar concerto is different in some ways. Primarily, it doesn't have that orchestral introduction; the instrument takes over the main theme, that whole thing," Ponti explains. "It really is more conversation back and forth between the cello and the orchestra. It's kind of like wonderful dancing."

"I take the lead as an orchestral conductor sometimes, and he'll accompany. Then he takes the lead, and I accompany the orchestra. It's a beautiful moment, and Elgar doesn't follow the concert form, which makes it a beautiful conversation. It's going to be a nice dialogue," Ponti concludes.

The PSO will present Beethoven's Symphony No. 6 and Elgar's Cello Concerto on Saturday, March 14th, at 7:30 p.m at the Carson Center. Tickets can be purchased  online. For more information on the PSO, visit their website. 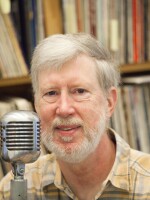 George Eldred
George Eldred has lived most of his life in Princeton, Kentucky except for a 15 year stint of studying music in Sewanee, Tennessee and Lawrence, Kansas and working in camera and photo finishing shops in the Washington, DC area. George first went on the air around the 4th grade when the local station in Princeton used to get elementary school students to read children's books from the library on the air.
See stories by George Eldred

Melanie Davis-McAfee
Melanie Davis-McAfee graduated from Murray State University in 2018 with a BA in Music Business. She has been working for WKMS as a Music and Operations Assistant since 2017. Melanie hosts the late-night alternative show Alien Lanes, Fridays at 11 pm with co-host Tim Peyton. She also produces Rick Nance's Kitchen Sink and Datebook and writes Sounds Good stories for the web.
See stories by Melanie Davis-McAfee
Learn All About WKMS Vehicle Donation!
Looking for Something to Do?
Search Local Events
Related Content