Two attorneys and three judges met with the Governor’s Council for Judicial Appointments in Knoxville on Wednesday in the hopes of securing a seat on the Tennessee Supreme Court.

Five candidates aimed to replace Justice Sharon Lee, who will retire from the bench in August. Appointed by Gov. Phil Bredesen in 2008, Lee is the longest serving justice on the court.

“She is the last holdover from a previous era in Tennessee politics, when politics was much more closely divided between Democrats and Republicans. She’s had a long and distinguished career, and she’s just ready for retirement,” said The Tennessee Journal editor Erik Schelzig on Wednesday’s episode of This Is Nashville.

Schelzig called Lee a “progressive voice” in comparison to the four other sitting justices, who were all appointed by Republican governors.

With Lee’s departure, another Republican governor — Gov. Bill Lee — will pick her replacement.

Before the new justice can be selected, they must meet three requirements to serve on the state’s highest court. The future justice must be 35 or older, be authorized to practice law in Tennessee and have lived in the state for at least five years.

In December, the state announced that it received five applications for the judicial vacancy:

On This Is Nashville, Schelzig said he believed Davis had a good chance of being named a finalist since she had gone through the process before. He also predicted that Greenholtz and Tarwater would be the two other finalists.

The Governor’s Council for Judicial Appointments sent the names of its preferred three finalists to Gov. Bill Lee later Wednesday, and they matched up exactly with Schelzig’s forecast: Davis, Greenholtz and Tarwater.

Once Gov. Lee picks his appointee, the state legislature will vote on their nomination. It could be weeks before the final decision is made.

“We’ll see a period of quiet because there’s nothing public after that until the governor emerges and says, ‘Here’s my choice,'” said Schelzig. 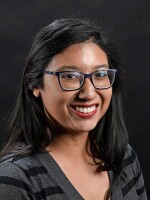 Anna Gallegos-Cannon
Anna Gallegos-Cannon is a native Texan who bounced around the United States before landing in Nashville in 2018. Prior to joining WPLN, Anna was a digital producer for The Tennessean. She previously worked as a copy editor for the Atlanta Journal Constitution, a reporter for The Oakland Tribune, and hockey writer for Sports Illustrated, among other media jobs. When she isn’t working in the news, Anna is attempting to read all of the Pulitzer Prize winning novels, playing fetch with her dog Radar, or watching hockey.
See stories by Anna Gallegos-Cannon
Learn All About WKMS Vehicle Donation!
Looking for Something to Do?
Search Local Events
Related Content