We’re having some technical issues with WKMD 90.9 FM in Madisonville. The signal is currently at low power and we’re working to get back up fully. Thanks for your patience.
Arts & Culture

Oh Gee! Murray's Playhouse in the Park presents its Penguin Project's Production of Annie, Jr. Four months in the works, The Penguin Project was created by pediatrician Dr. Andy Morgan to give students with disabilities an opportunity to be stars on stage, by pairing them with peer mentors. On Sounds Good, Asia Burnett talks with Murray's Playhouse in the Park Director Lisa Cope about the artists and mentors that make this show, opening Friday.

Annie, Jr. puts the comic strip heroine center stage in a musical comedy adapted for young performers, including the hit "Tomorrow." Lisa Cope says that in the final days of rehearsal, the group of actors and mentors just have a big party. But early on, the young performers had to come out of comfort zones and learn to interact with each other. Cope says she had to gain the trust of parents and help them feel comfortable knowing that they had the best interest of their kids at heart.

"Just to see those friendships form," Cope says, "[now] they cant wait to see each other... It's a great thing to watch."

Playhouse in the Park is the 7ththeatre in the country, and the first in Kentucky, to do The Penguin Project.

More about The Penguin Project

Matt Markgraf
Matt Markgraf joined the WKMS team as a student in January 2007. He's served in a variety of roles over the years: as News Director March 2016-September 2019 and previously as the New Media & Promotions Coordinator beginning in 2011. Prior to that, he was a graduate and undergraduate assistant. He is currently the host of the international music show Imported on Sunday nights at 10 p.m.
See stories by Matt Markgraf 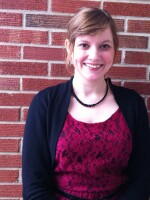