Giving Up to Play in Murray

The band Giving Up will be coming into Murray this week with a full head of steam, as its latest album, Garner Cardinals, was featured by NPR last week.

"We're really stoked that it happened," band member Mikey Pollard said in an interview with Austin Carter on Sounds Good.

Giving Up will be in concert Thursday night at Murray's Terrapin Station. Pollard said the band enjoys playing gigs in small, rural communities like Murray.

"All of our band is from an incredibly rural small town in Iowa," Pollard said. "There’s not a lot of access to live music unless you do it yourself, and I think Murray kind of also has that going on. That sort of mentality is really in my heart."

The concert will begin at approximately 8 p.m.

Austin Carter
Austin Carter is a Murray State grad and has been involved with WKMS since he was in high school. Over the years he has been a producer for WKMS and has hosted several music shows, but now calls Morning Edition his home each weekday morning.
See stories by Austin Carter 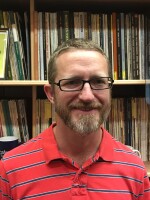